On Monday, November 13th, our baby Abel was diagnosed with a rare form of Craniosynostosis called Lambdoid Craniosynostosis. The left suture in the back of his head never formed which creates an abnormal shaped head as the brain grows and expands. In his case, everything was growing and expanding on the right side of his head. Before we met with the neurosurgeon, we thought worst case scenario he would have to wear a helmet to reshape his head. That was not the case. Unfortunately, he had to have surgery to create a expansion joints in his skull to give his brain the flexibility to grow. On Thursday, November 30th, he had a procedure called Cranial Vault Reconstruction.

The only thing we knew to do in this situation was pray and ask others to pray. God gave us a overwhelming sense of peace through all of this. The surgery couldn’t have gone better! We were in the PICU for a total of 4 days. The first two days were the hardest. Our baby was in pain and uncomfortable. On the second day the swelling was so bad, he didn’t even look like our baby but on the third day we got some smiles and we knew he was on his way to feeling better. It was such a whirl wind of two weeks and I’m thankful to be in the healing phase. 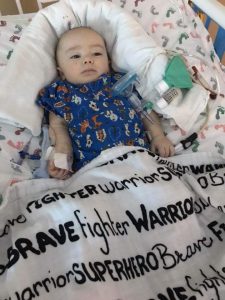