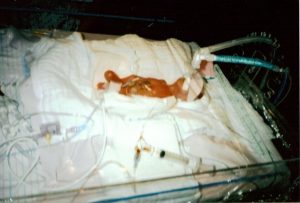 My 102 day NICU stay consisted of what would be considered the typical complications associated any micro-preemie. I suffered a Grade II IVH on day 1 with a resulting diagnosis of PVL on day 28. My PDA caused major issues on day 6 as my mother was sitting bedside and the cardiologist had them start me on Indomethicin to close this without the need for surgery. My mom says she can remember the conversation about what my urine output had been before starting this medication and didn’t think anything of this until the next day when things got much worse. Within 24 hours (and after the 2nd dose) of starting the Indomethicin my body went into acute kidney failure resulting in a 300 gram gain of fluid that then compromised every other organ of mine. That night I lost all blood flow to my left leg with no doppler pulses detected, they started suspecting that I was suffering from NEC and switched me to an oscillating ventilator to aid in perfusion.

Thankfully the neonatologists were relentless in their efforts to see me through. At one point the general pediatric surgeon wanted my family to consider taking me to the OR to determine if NEC was indeed still an issue. My mom felt that this was possibly a time to consider stopping support and allowing me to pass on in peace and not in an operating room without her ever having held me. When she arrived at the hospital the morning of the planned surgery my mom was there prepared to say a final goodbye but walked into a NICU with nurses standing around my bed smiling. According to them at some point the night before my kidneys had started working again and every other thing they were worried about was starting to resolve.

I continued to grow and thrive during my stay coming home from the NICU at 102 days with an apnea monitor and only caffeine and Propulsid  (for reflux ) to daily. I was officially diagnosed with cerebral palsy at 13 months but thankfully had already been in early intervention services since 5 months of age.

As a young adult most of my daily life is in some way still impacted by my premature arrival but my mom (who after my birth went back to school to become a NICU nurse) reminds me daily how blessed I am to be here to tell my story .

—-Check out Daily Life Of A Former Preemie on facebook to learn more about Alyssa’s journey.—-