Anneliese is our very own super hero. Her journey began while I was still pregnant. At 18 weeks gestation it became apparent that there was something seriously wrong with our sweet little baby girl. Her prognosis didn’t look too good but there was too many unknowns to give her a diagnosis or a sound prognosis.

On February 7 2016 at 36 +6 weeks Anneliese came into this world and the fight of her life began. She was immediately whisked away to the NICU where she was placed on cpap, an NG tube and given a shot of vitamin k. Anneliese was born severely jaundice as my body tried to reject her, ( I’m negative blood and she’s positive), she was born with tordicollis in her neck, aqeductal stenosis which caused hydrocephalus, her hydrocephalus caused spastic quadriplegic cerebral palsy, she has one ear that’s slightly folded over with an ear tag, she has an enlarged heart with an ASD and a VSD. Her heart conditions do not pose any health concerns but she still has a cardiologist and goes for heart echos to keep an eye on everything. 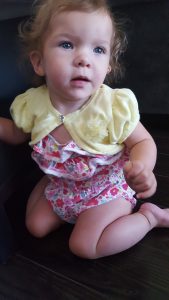 Today Anneliese is 17 months old. She can not walk, to sit unassisted she w sits as she does not have the support to sit unassisted on her bum. We are currently in the process of getting her a walker for trial and have been approved for a bath seat. She has had 5 brain surgeries to treat her hydrocephalus with a VP shunt. Hydrocephalus is only treated through surgery and there is no cure. Anneliese has spent around 70 days in hospital, the large majority in the Stollery children’s hospital with a total of 7 admissions to the stollery. During her NICU days ( she was NICU for 3 weeks) she stayed at the Misericordia as well as the Royal Alexandra hospital where she was born. Anneliese has had to endure countless MRI’s, 2 CT scans, 4 chest xrays, head ultrasound, tummy ultrasound, 3 heart echos, 2 EKGs, shunt taps, hearing tests, eye exams, blood tests. She’s in regular physical therapy and has an EIP. She’s delayed on her gross motor and speech.

Even with everything Anneliese is the happiest child. She’s always smiling and ready to play. Trying hard everyday working on her pulling up to standing skills. She’s been such a blessing to our family and an inspiration to many. Her favourite person is her brother who she really enjoys playing blocks and cars with him or just cuddling up to while watching movies.

Anneliese may have special needs but she won’t let anything hold her back or define her. She does a pretty good job of defying the odds to get things done her own way. And we will be by her side every step of the way helping her pave her own path on this journey.