My story begins in June of 2017. I was a high risk pregnancy and I had been put onto full time bed rest at 21 weeks. I was moved to Foothills in Calgary at 22 and 4 in case I needed to deliver. They went over all the pros and cons about having a super premature birth. At 23 and 4, Miss Charlotte decided that she couldn’t wait any longer to come into this world and was born naturally at 11:10am, after just 4 hours. It was fast and furious. I never really got the chance to wrap my head around what had happened before she was taken from the delivery room into the NICU. She was born weighing 640g, which that GOD put her into the 90th percentile for her gestational age.

After being in the NICU for 2 days we discovered how much of a battle we were going to encounter. Charlotte was born with a grade 4 brain bleed on the left side, she also had some hydrocephalus too. We were told to start making plans and bring in family and not to expect to make the end of the week. Talk about devastating news. I sat with my husband in that small conference room and sobbed for what seemed like hours. Not knowing if I was strong enough to leave and go to her bedside.  We called in our parents and the pastor to have Charlotte baptized. It was the one thing that I insisted on. My husband and I talked about end of care. We were given the option of a repeat head ultrasound. We had decided that if the scans came back worse then we would make the hardest decision then.

The next day her scan came back the same no change. We were so confused as what to do. The neo that we had on was still spouting off things like massive brain damage, no normal life, 24 hour care, CP, epilepsy, you name it. We decided to go for lunch. By this time I had about 5 messages from my ANGEL telling me to call her ASAP.  I couldn’t stand to talk to anyone, so I made my husband call. It was that call that changed our life completely. Our angel told us that her son was born with 2 grade 4 bleeds and hydrocephalus. She told us of his story and not to under any circumstances make any drastic decisions, because doctors are basically stupid and always tell you the worst that can happen and never the other side of the coin.  After that call, we sat, more confused that ever. And in that moment, we decided that uphill battle or not, Charlotte was OUR perfect princess and we would fight with her and for her.

We went back to the doctors and told them that we are in this for the long haul. Little did we know, how long this haul was going to be.  We reached the day 10 mark. Charlotte had contracted a massive infection that shut down her kidneys and totally messed up her lungs. We were put of a heavy dose of antibiotics to help combat whatever what hurting her.
Within 24 hours, she took a turn for the better. We went through a whole slew of tests, from head to toe trying to figure out why she got sick in the first place. They never did find out what happened. (Miracle #1)

At day 14, Miss Charlotte decided to self extubate herself. Good times. (NOT). So, we tried breathing on our own. Things were going well, so we left the hospital to get some sleep. 7AM we get the call that Charlotte was on 100% oxygen and needed to be re-intubated. Not really a surprise.  She was 5 weeks old when she was finally put on SiPAP again. But not first before using every breathing machine to help her chronic lungs to get strong. When babies are born their lungs have about 2 million sacks to help them breathe, Charlotte was so small, she had about 20 000. So we used the JET machine, the Oscillator, and then finally her lungs started to stay strong and not collapse.

Through this all, we also learned that Charlotte’s brain bleed was not getting worse, it was no longer actively bleeding. However the hydrocephalus was monitored by twice weekly head measurements, and once weekly head ultrasounds. (Those days always stressed me out).  At about 6 weeks we got news that Charlotte’s brain was now starting to HEAL ITSELF!! (Miracle #2) She had a massive midline shift from the bleed being to large (so her left side was squishing her right) and it was GONE! Her brain was starting to show signs of regeneration. (Miracle #3).

Charlotte was put onto CPAP 24 hours after going onto the SiPAP machine, so that was also good news.  Once we got to CPAP, things were a battle with Charlotte, she was getting bigger and loved to have what we called “helping hands”. She was always pulling at her OG tube, or pulling her mask off her nose. Especially the prongs up her nose.  In total, we were on CPAP 10 weeks before we got to try the high flow nasal prongs. I battled for almost 2 full weeks to try and get her onto this machine. Not only for her sake, but mine as well. I knew that once we got to high flow, we could get transferred to Red Deer hospital (we are from Blackfalds and I had never gone home for more than a few hours twice in 3.5 months). I was done with hospitals.  Charlotte was trialed on high flow and lasted a few hours before going back on CPAP. It was another week before we were able to try the high flow again Then the whirl wind started.   Once she was successfully on the high flow, she was on them about 8 days and got to trial the low flow, again it was on and off quickly (We have learned that Charlotte likes to try everything twice before becoming successful).

The third time on low flow, we finally got the call that Red Deer had a bed for us! OMG we were finally going home after 104 days in Calgary!! I was beyond excited! We were transferred the day before my original due date (October 5th, my due date was Oct. 6th).  Red Deer is so much more relaxed and quiet compared to the busy NICU in Calgary. The doctors and nurse basically let you run the show and if the baby needs help medically then they come. Charlotte’s main objective once we got to Red Deer, was to eat and grow. We knew that we couldn’t come home on an NG tube (I wasn’t comfortable with that idea). So grow is what we did.  We were trialed off oxygen on room air 3 times and failed 3 times We lasted 24 mins the first time, 2.5 hours the second time and 12 hours the 3rd time.

We flew through our SINC stages with bottle feeding and were soon eating all on our own. We finally got to pull her NG tube. The end was near.  We had one more thing to overcome and that was to prove to the air company that we needed the oxygen to come home. So, off the oxygen for a 4th time. We lasted 13 hours…point proven LOL.  I got to spend the night with Charlotte on the Thursday so I could get used to waking up with her. She passed her car seat test with flying colors and finally after 129 days and 2 NICUs, WE GOT TO GO HOME!!!!

Charlotte is still on oxygen coming home and will be for the better part of a month before we will go and try again.  We also see doctors for her head bleed, kidneys (oh ya, she ended up with kidney stones along the way), ovarian cyst (yup, had one of those too…insert eye roll here), and her eyes for the ROP. So, basically all winter we will be at the children’s hospital back and forth. 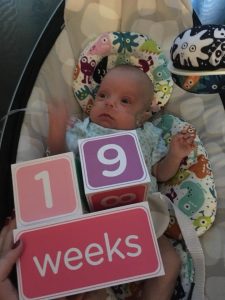 It has been a long and wild journey, and it has taken me forever to be able to write this out, but it truly is worth every single test, doctor and sleepless night to finally have my miracle baby home!!