We found out our baby had a heart defect at our 20 week anatomy scan. Little did we know at that time, but his heart defect wouldn’t even be the biggest thing we faced once he came out fighting.

Everett was born on October 9, 2016, two months premature. He fought long and hard for four and a half months in the hospital. He had two hybrid heart surgeries, one at 9 days old and 4 lbs…and the next at 16 days old, still 4 lbs. Due to his prematurity and underdeveloped body tissue, Everett went through many procedures involving bronchs to help keep his airway open, one emergent cath lab procedure to retrieve a wire that broke off in him from a central line, and one scary blood loss episode during a transfusion gone wrong. It was determined in January of 2017 that it was time for him to have his “big” repair for his heart, so he went in for his first open heart surgery at the end of the month. He continued to recover for 6 weeks in the hospital, where he finally went home for the first time after 142 days.

Being at home was magical. Our house was turned into a makeshift hospital room and our hearts were so full. Everett thrived for two months at home with Home therapies and nursing visits weekly.

On May 6 2017, we noticed that he wasn’t acting right. He wasn’t his usual smiling self and after a day he started to become inconsolable. We were told it was probably just a virus coming on and to go visit his PCP the next day. Call it parent intuition, but we couldn’t wait. We took him to the ER where things got far worse. He had a stroke on the bed table (thank God we were not still at home) and it was found that he had a huge bleed on his brain. A neurosurgeon was called in at 3 AM Monday morning and performed a life saving surgery on his brain to get the bleed out. We were told before the surgery that the chance of survival was slim to none. He came through with flying colors and proved everyone wrong. He spent one month in the hospital and one week in inpatient rehab due to a weakened right side from the stroke. We brought him home and watched him beat most every odd he was given after that horrific happening.

On August 28th 2017 Everett went in for his “final, final” big heart repair (after many MRI’s and tests to make sure his brain was healing). Much to everyone’s surprise, he only spent 5 days in the hospital recovering. He sailed through the major heart surgery, and is a new baby! We’ve been home ever since and are so happy to start a new chapter moving forward. 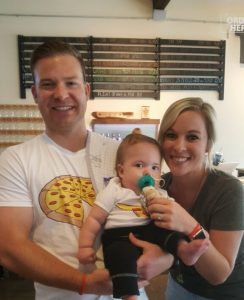 Everett just turned 1 on October 9. He can’t sit up all by himself (yet) and is still learning all things tummy time. After spending almost 6 Months in the hospital, he hasn’t had much time to be a “baby”. During his first year of life he’s had 4 heart surgeries, 2 brain operations, 9 procedures. He’s a smiling, happy, thriving baby. Everett will have carbs and another OHS during his life, but we cannot wait to see all the big things he does in this world. We’re so grateful to every person, friend, family, nurse, doctor, and stranger who has helped him get where he is today. We’re so thankful he’s ours.