Kaily was born a healthy 8lbs 5oz at 37 weeks. She grew to be very strong, funny, and she loved her food. At 9 months old, she was doing every 9 month olds were supposed to do. Walking along furniture, speaking small words, drinking from a sippy cup, and absolutely loved to play and wrestle with her older brother and sister. But when she came down with a cold (btw she had not gotten sick or any type of cold since birth) we took her to the dr. The first visit with the dr said it was vital and sent her home, but 2 days later she had gotten worse. So I rushed her to our local E.R, and they didn’t have the necessities to care for her so she was transferred to A hospital in the city, Red Deer. There they said she had bronchitis, gave her antibiotics. After 3 days of being there the drs had told us she had fluid in her lungs and needed to be transferred to Stollery children’s hospital.
So on the ambulance we went. Immediately they took her up to the PICU, inserted a chest tube to drain the fluid, and hooked her to some oxygen- ventiflow (I believe). We were there in PICU for 3 days also and at this point my Kaily started to look real good, she was watching everyone and playing with the tubes hooked to her, she was herself. So my husband and I went out, for some food at wal mart.
Then we got a call while shopping, Kaily had a seizure. Which she has never had before. And suddenly deteriorated rapidly. So they hooked her to an EEG, and it showed that she was having seizures on the machine but not visible. Immediately they told us she needs to be transferred to Calgary, where they have 24hr EEG machines, which Stollery could not do for us. So after 4 nights at the Stollery, we left to Calgary. 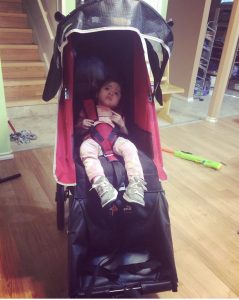 In Calgary they had hooked to the EEG for a number of days, pumped her with seizure meds, even a steroid. They had to put her in a comatose in hopes for the seizures to stop. After 10 days of being in a comatose she woke up. No seizures, at this point she was aware, watching up, she knew she didn’t like it when the nurses and drs would touch her, she was aware. But, she started to have withdrawals from all the meds they pumped into her and the rapidness of taking her off them. Eventually she went back to having seizures and back to the EEG. And fell back to a comatose.

At this point the drs had told us what had happened to her brain from all of this. Here they gave us the news that her motor skills have been affected and basically gave us the worse possible news. But once she did not require the EEG I requested for her to be transferred back to Stollery. So after 3 intubations, 2 extubations, multiple EEGs, and 3 weeks of being in Calgary we left back to edmonton.
When we got back everything seemed to get in control.. did multiple tests on her, muscle biopsy, nerve biopsy, and in the end prognosis- Post Infection Encyphallitis. Finally after 5 1/2 months of being in hospital, after having a gtube inserted, getting a fundo done, and a number of different specialists we were able to go home.
At he age of 19 months she was diagnosed also with cerebral palsy, with all 4 limbs affected. Has a lot of thereapy, follow up visits to her neurologist, home nutrition, optomology, regular visits to her pediatrician, and annual visits to her child developmentalist.
Right now my Kaily is doing very good. She is scheduled for Botox injections this month, has a suction machine with us at home, right now does not eat any food orally, occasionally holds her head up, but needs assistance to sit as well as a lot of her daily care. This past fall she did walk on her own for a short time in a walker. So she is slowly accomplishing these goals and are looking forward to a lot more in the future.