Liam’s journey began September of 2016 when he had his first tonic clonic seizure, which paralyzed him on the left side for numerous hours. One month later Liam suffered two absence seizures, one lasting 7 minutes, within a few hours. He was diagnosed with epilepsy and started on his first medication. Since his diagnosis Liam developed 4 different seizure types, and has tried, and failed eight different seizure meds and the ketogenic diet. Today he still suffers from daily seizure activity and his group of doctors are working hard to pinpoint a diagnosis for him. 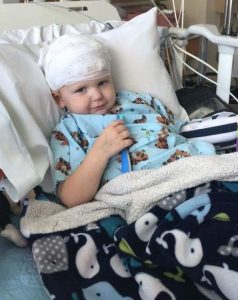 In addition to Epilepsy, Liam recently began suffering from cardiac arrhythmias that put him into cardiac arrest four times over a course of a week and a half.  He was admitted at Lurie Children’s Hospital in Chicago for 5 weeks, and continued outpatient intensive rehab 5 days a week following discharge to relearn how to stand, walk, talk, and eat again. He now has a defibrillator and has been diagnosed with a channelopathy in his sodium channels. The specific channelopathy is still under discussion as we wait the result of his genetic testing. His tentative diagnosis is Hyperkalemic Periodic Paralysis. 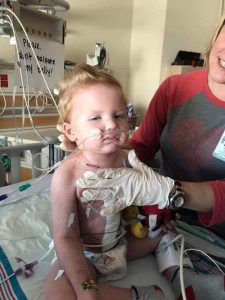 Liam is our little superhero who takes on his challenges with a smile. We just hope to find an effective treatment plan and get our baby back to bubbly 2 year old self. 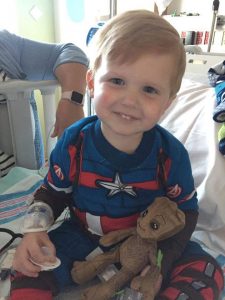 “From a small seed, a mighty trunk can grow”