When becoming a Mother, you have a picture in your head, a picture of the way it is and the way it should be. Unfortunately this is not always the case, and your reality becomes vastly different.

April 9th 2016 , Our world was changed.
Meet Rossy Hipkin. Rossy was born with Arthrogryposis Multiplex Congenita (AMC) a condition affecting muscles and joints, that causes them to have little or no muscle and causes his joints to be stuck. In Rossy’s case only his arms are affected from the shoulders down. He was also born with Scoliosis (greater than 60 degrees) Lordosis (a bend in his spine) Dextroposition (heart on the right side), severe low muscle tone (affecting sitting, walking, standing, crawling, and his ability to keep himself straight, this also has affected his breathing and immune system). Rossy wears a bipap and oxygen at night as his positional issues affect his lungs and oxygen levels. Rossy’s greatest accomplishment to date, is that he celebrated his first birthday. As 1 in 3 children born with amc does not survive the first year of life. AMC affects 1 in 3000, his type, Amyoplasia, affects 1 in 10,000 … only less than 15 % of that 10,000 are only affected in the upper limbs, and 1 in 30,000 have the scoliosis. You do the math, basically Rossy is a Unicorn.

Today as I sit here, Never.. Can’t… Won’t… Will not.. are no longer existent in our vocabularies.
We have learned that not only Can he , and will he, but he will do it better than you or I ever will, and in his own way.

To date in his short one year on earth, Rossy has found ways to move his arms, lay straight, crawl (with no arms might I add) get into anything and everything and is currently learning to drive a power chair with his feet…. All at the ripe old age of One.

What stands out is his determination and attitude. Our weeks are spent with countless appointments, testing , physiotherapy and hard hard work. We as a family have made huge sacrifices to make all these things happen. And best of all he smiles. He smiles all day, through everything. Through castings, bracings, testing, needles, hospital stays and every bit of pain he has endured. 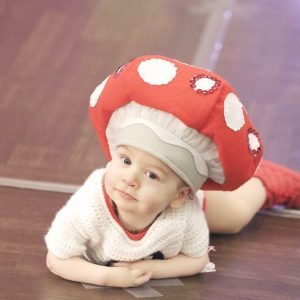 Why am I sharing all this information…because I am tired of people counting people, let alone kids out. I want people to know: You can do anything you want, don’t give up. If you want to be a doctor be a doctor, if you want to dance then dance. Most importantly be happy. You are not alone and you are no different than anybody else. Rossy can do things that even I, as a fully capable adult, cannot do. And he definitely takes the hard times better than I. He has shown us nothing is impossible, and no mountain is to tall. And don’t let anyone tell you any different, most importantly do it your own way. Always be yourself. It’s time to recognize people for their strengths not their weaknesses. And not look at what people look like or what abilities they have or don’t have. And take NOTHING for granted.

Although our reality is a different one. It is an amazing one none the less and we wouldn’t change a thing.